At YD Industries we frequently take the opportunity to venture out of the office for invaluable off-campus executive team-building. That’s exactly what happened on a recent Tuesday when a group of twenty three regional sales managers woke up early, loaded up with coffee, and piled into a company passenger van. A short hour and a half later, the team disembarked at the Blue Swanee Ropes Course for a rigorous day of problem solving while dangling from nylon cord at dizzying forest altitudes. 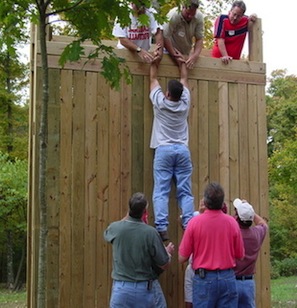 Clad in protective harnesses and helmets, the sales team tackled a variety of logistical challenges that pushed the boundaries and limits of participant endurance and personal fears. Highlights included:

The day ended with a highly inspiring group exercise where all present YD team-members worked together to build the mud faith pyramid in Jansen’s Swamp. Over 7 gravity defying feet tall, the sludge tower stood as a testament to the great things that can be accomplished when a team puts egos aside and sets their collective eye on the prize.

All in all, the ropes course was just the sort of camaraderie building activity the group needed, and the kind of unique exercise that makes YD Industries such an amazing place to work. With renewed collective purpose, the crew is now prepared for ultimate success and is ready to go for the gold!