A Deep Space Voyage to Uranus

Exploration of the many planetary neighbors in our solar system was a longtime fantasy of our ancestors, including the cave dwelling ancients. Incredibly, with the advent of high technology, humans endowed with money, slide rules and shiny spacecrafts have suddenly made many of these long-held fantasies realities. We have sent men to the moon to plant our mighty striped flag, play golf, and “off-road” aboard a special moon sport utility vehicle. Mars has received a small bombardment of rovers and robotic probes. Crafts like Voyager I and II have traveled to the farthest reaches of our solar system where they took magnificent pictures and beamed back reams of scientific data. 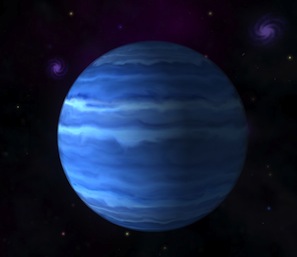 Methane obsucres many of the mysteries around Uranus.

However, we at YD Industries believe that there is one celestial exploration fantasy still to be adequately fulfilled: Uranus!

Common people talk about Martians on Mars and the mighty rings of Saturn and Jupiter, but thoughts of Uranus have been strangely taboo. For all we know, the planet might very well have “Uranusians” living in icy caves. We already know our distant neighbor has at least eleven rings that encircle Uranus and there may be more.

We at YD Industries have taken it upon ourselves to find out more about the dark and mysterious Uranus. In 2009, we designed and launched a deep space, rocket propelled craft that is scheduled to approach, penetrate and probe the core of Uranus in order to unlock the secrets that lie within. The rocket is laden with powerful thrusters as well as mechanisms for delicate ring examination. In addition, a specially designed titanium record compiled by experts at YD Industries’ Sonic Laboratories will play glorious sounds of earth, including: chickens, vacuum cleaners, thunderclaps, as well as selected hits from the earth-famous, classic boy band Menudo. 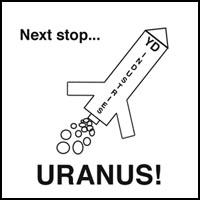 YDI is getting ready for an encounter with Uranus.

Using a patented technique of gravitational slings and anti-matter slops, the scientists and engineers at YD Industries have been able to send the Uranus probe to its target in half the time of NASA’s Voyager II craft. Sometime in the winter of 2014, engineers anticipate that the craft will come into contact with the URANUS outer gas field and will begin taking deep and extensive measurements.

One can only assume that the YD Industries control room members will be holding their collective breaths with the final approach to Uranus. Stay tuned to this website for live, up to the minute, rich-media reports as we near this exciting and foreboding celestial target. Feel free to comment below if you have any questions about Uranus.